About four or five months ago, a song started showing up in my YouTube Music feed called Level of Concern by Twenty One Pilots. It immediately “grabbed” me and made a pretty deep impression. I immediately started doing some research on the band and the more I read and heard, the more I fell in love with these guys. I initially just jumped in and started listening to a variety of their other songs on YouTube. I was surprised by how many of them I was already familiar with after hearing them on the radio station that I listened to here in Seattle. However, the songs themselves didn’t convince me to move beyond a passing listen. It was the depth of their lyrics and the stories told in their videos. These guys weren’t the usual fare.

Their lyrics are deep. They weren’t about the usual fluff you normally hear in top 40 songs. These songs are about issues such as depression, anxiety, and even faith – things that spoke to my heart about the hurt and pain I routinely felt. It felt weird knowing that I was a 63 year-old man listening to this 20-something duo, but I found their fans were quite accommodating to someone my age. I was quickly welcomed to the “Clique” as they call themselves. (I found out that many of these folks have similarly found themselves to be outcasts such as myself and that’s why they’re so welcoming.)

Another thing that I like about the Pilots is their approach to music. The duo’s albums (at least their latest 3) are written around this over-arching concept – a land called Trench and a city called Dema controlled by a group of nine authoritarian bishops. The citizens of Dema are trapped and kept from escaping – when one is able to break out of the city, the bishop assigned to the individual is tasked to bring them back. This isn’t merely a fantasy story. As lead singer and songwriter Tyler Joseph explains, this is an allegory for his experiences with depression and anxiety – yes, at times he feels he has escaped from the depths, but still he finds himself dragged back down at a later time. Like the citizens of Dema, he finds himself escaping despair then dragged back again. It’s a constant battle and not something he is ever completely over.

I’ve included sort of a chronological story below using some of their videos that portrays Trench and Dema better. You’ll find the “official” videos in the left column; I’ve also included versions that display just the lyrics in the right. Be aware – some of these songs are heavily rap. It may not be your cup of tea, but I strongly suggest giving each a listen. This isn’t the usual stuff relating to sex, drugs, and other “gangster”-related topics. As Tyler says in the first song, “This is not rap, this is not hip hop. Just another attempt to make the voices stop.” It’s hard for me to admit, but some of my favorite songs are the heavy rap numbers (heavydirtysoul and Levitate).

I invite you to watch each official video followed by the one with the lyrics. If you do, you might find that you, too, relate a lot to these guys if you deal with issues like depression and anxiety.

(Note: I originally wrote this quite differently with a blow by blow of each of the videos. However, I changed my mind and decided to just give a brief bullet list of ways in which I relate to what they’re singing about. It’s still not perfect, but I could devote a blog post to each song and it still wouldn’t cover everything well.

I’ll also include a few things that might be a little cryptic here and there but I leave a lot of it up to you to interpret yourself. That’s part of the world of Twenty One Pilots – for each song, there’s usually multiple theories and discussions how members of the Clique interpret things. Below is a partial view of mine.)

heavydirtysoul opens the album Blurryface and sets the stage for the remainder of the songs. It’s heavily rap spoken at breakneck speed. On the lyric side, I’ve included a version that’s been slowed down so you can understand them a little better.

Stressed Out is probably the most familiar song off of Blurryface as it was a huge hit on the radio. The song plays a role in later videos; thus, I’ve included it here:

(I’ll be honest – the first time I saw this video, I thought these guys were a couple of goofballs. Only after reading more about their background do I see the purpose in this video.)

The album Trench begins a new era for the band, one in which the land of Trench and the city of Dema is explicitly discussed and shown in videos. Jumpsuit opens the album and serves as the first video of a trilogy showing life under the bishops.

Nico and the Niners

So there you have it – my brief overview of Twenty One Pilots. There’s a lot in these videos and I’ve only covered a fraction of it. They’ll likely make a few more appearances on Mystical Bear as I am including them in my writing process.

I have deep respect for them because they’re trying to do the same thing I’m trying to do here – use my pain, my depression, anxiety, and PTSD experiences, and turn them into something good and helpful to others that might be going through the same thing. Like Tyler, and like me, you, too, can learn to levitate with just a little help. So be it. 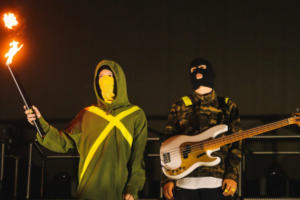 Nurse Rick At Your Service